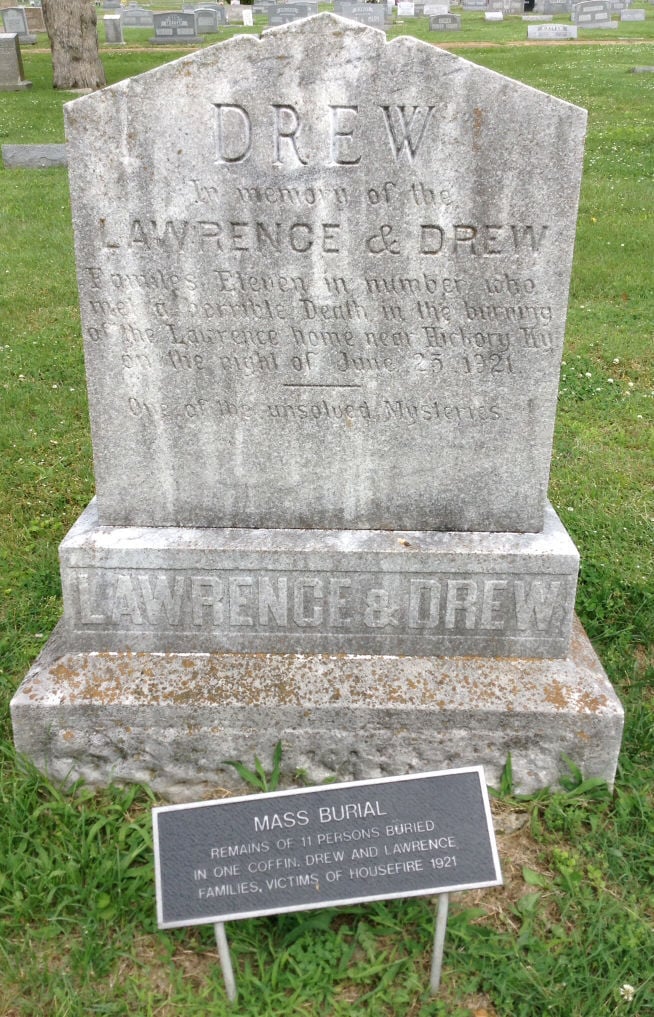 The remains of both families — Lawrences and Drews —were so badly charred in the fire 100 years ago that investigators at the time could not determine who was who, nor how they died. All 11 of them were committed to a single mass grave in Mayfield’s Maplewood Cemetery, where the marker still stands today.

Ernest Lawrence (from left), Ola Lawrence, Lora Drew and Otis Drew, along with their children and a nephew, were all killed nearly 100 years ago. The coroner jury at the time ruled they were murdered, but the mystery remains unsolved today. Their story and ultimate demise serves was the basis for “Dark Fire,” a new book by a living relative, Bernadette Rule. 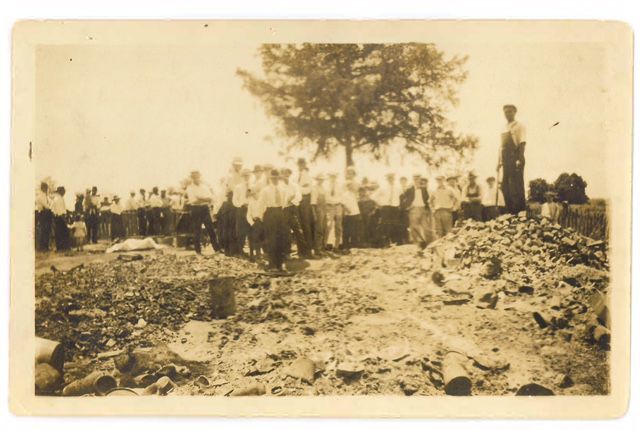 A crowd works on what remained of the Lawrence home near Hickory Grove in northern Graves County, where the two families perished. This is one of many grim historical photos in Bernadette Rule’s book, “Dark Fire,” which is being sold at the Icehouse Gallery in Mayfield.

It sounds like an old episode of “Unsolved Mysteries.”

A century ago, tragedy struck when two families — men, women and children, were killed, but there were no witnesses and no suspects. However, authorities at the time were certain of one thing: It was murder.

It’s hard to imagine such an event could have occurred anywhere nearby, let alone in northern Graves County, but old news articles provided by Mayfield historian John Davis confirmed it indeed happened. It’s a grim tale that one living relative of both families, Bernadette Rule, hopes to shine a light on once more in her book, “Dark Fire.”

In her book, Rule takes old fashioned research, first- and second-hand accounts, and a blend of creative nonfiction to show what may have led to the very real and horrible deaths of her father’s and uncle’s first-cousins, the Drew and Lawrence families, on June 25-26, 1921.

Old news articles of the incident can still be found today on microfilm at the Graves County Library. Davis provided a couple of these articles, along with photos, to The Paducah Sun’s sister paper, The Mayfield Messenger, which was called The Daily Messenger at the time of the murders. One of them provided a first-hand glimpse into residents’ minds in 1921 Mayfield and Graves County.

The article described the home of Ernest Lawrence as a “log and box shanty” that sat on a hilltop near Hickory Grove. It was found ablaze close to midnight with 11 people — the Drews and Lawrences — inside.

“There is no more picturesque setting in the whole state than the scene of this catastrophe,” it later reads.

While initial beliefs were that both families may have died in their sleep, the article states a few clues pulled from the ashes, along with witness accounts, pointed the coroner jury in a different direction — it was no simple house fire.

While there were no direct witnesses to the Drews’ and Lawrences’ fates, an unnamed witness to the house fire said the front doors and windows were wide open.

Though most of the named witnesses in the article testified before the coroner jury that they didn’t hear gunshots, two of them, Gracie Drew and R.M. Townsend, claimed to have heard several from their homes as the fire burned.

Townsend reportedly told “a Times reporter” he’d heard six to seven gunshots along with the screams of what sounded like women and children.

Townsend and Drew lived two miles and three quarters of a mile away respectively.

The article reads that the “consensus of opinion” came to be that it would have been “impossible” for the fire to kill 11 people while they slept in two rooms, both on the ground floor, with the doors and windows open, and “without a single soul escaping.”

Another article provided by Davis read that then Kentucky Gov. Edwin Morrow had offered a $500 reward, or $50 for each person.

Despite what the evidence suggests, no suspects were named in the case and no one was ever tried.

Davis said investigators even supposedly dug up the earth around the property, including the well, looking for clues.

“They did (an) investigation as good as they can investigate back in those days, and it’s been a hundred years. Things have changed a little bit since then,” Davis said.

There were some reports of a man lurking around the scene in the days after the murder, but it never furthered the investigation.

Though the mystery remains no more solved than it did the day of the fire, Rule believes she knows who was responsible, and that plays a big part in her book.

She said her father, Bernard “Yardstick” Rule, and uncle, Pat Rule, recalled their father, Hardin Rule, pointing to a large amount of hoof prints surrounding the Lawrence home as it burned. However, soon after word got around about the fire, a large crowd had formed and stamped the supposed prints out of existence.

This purported piece of evidence, Rule said, led her grandfather to state a possible culprit, one that is never mentioned in the news articles: Night Riders.

Per an unrelated historical article in the Tribune-Courier, Marshal County commissioner and local historian Justin Lamb said Night Riders were a union of tobacco farmers in the early 1900s. They had formed to boycott a big tobacco company, which had driven prices of the crop so far down that farmers could hardly live. Reportedly, big tobacco attempted to break this union by approaching some farmers within it and offering them better prices.

When the union at large caught wind of this, they would form raids to intimidate these weak links in the dead of night, which would sometimes lead to the burning of crops and property, like tobacco chutes.

Rule said one such chute was razed to the ground by Night Riders in 1920 Mayfield — referred to as “Greenberry” in her book. She said this event served as the catalyst for the ultimate fates of the Drews and Lawrences in 1921.

“I don’t know who was actually there. But I do know it was a large group on horseback who did it. And if you follow the thread back to March 1920, when Night Riders took over Mayfield and burned the tobacco chute, the scenario I draw in the book becomes more and more likely,” she said.

While Davis could not immediately confirm the burning of the tobacco chute referenced in Rule’s book, he said it was certainly possible. He also noted that Night Riders were certainly prevalent in the area in the early 1900s.

There are certainly some residents still alive who would remember stories about the murders, but Davis said “a lot of people don’t know about it, obviously.”

That’s one reason Rule changed the names of many characters centered around the actual murders.

“I was hoisted on my own petard in trying to memorialize the Drews and Lawrences, while at the same time, explaining who killed them. These are stark and serious charges I’m laying, so I changed the names of those I put outside — and later inside — the Lawrence home on June 25-26, 1921,” she said.

The names of the area were also changed, such as Mayfield to Greenberry and Graves County to Wills County. This was more for creative freedom on Rule’s part.

Despite living in Canada, Rule is a member of the Mayfield-Graves County Art Guild. Her book is now available at the Icehouse Gallery in Mayfield for $19.95.

After the fire, the bodies of both families were so badly charred and burned that investigators at the time could not determine who was who, let alone determine an exact cause of death.

They were buried together in a mass grave in Mayfield’s Maplewood Cemetery, where the grave marker stands to this day.