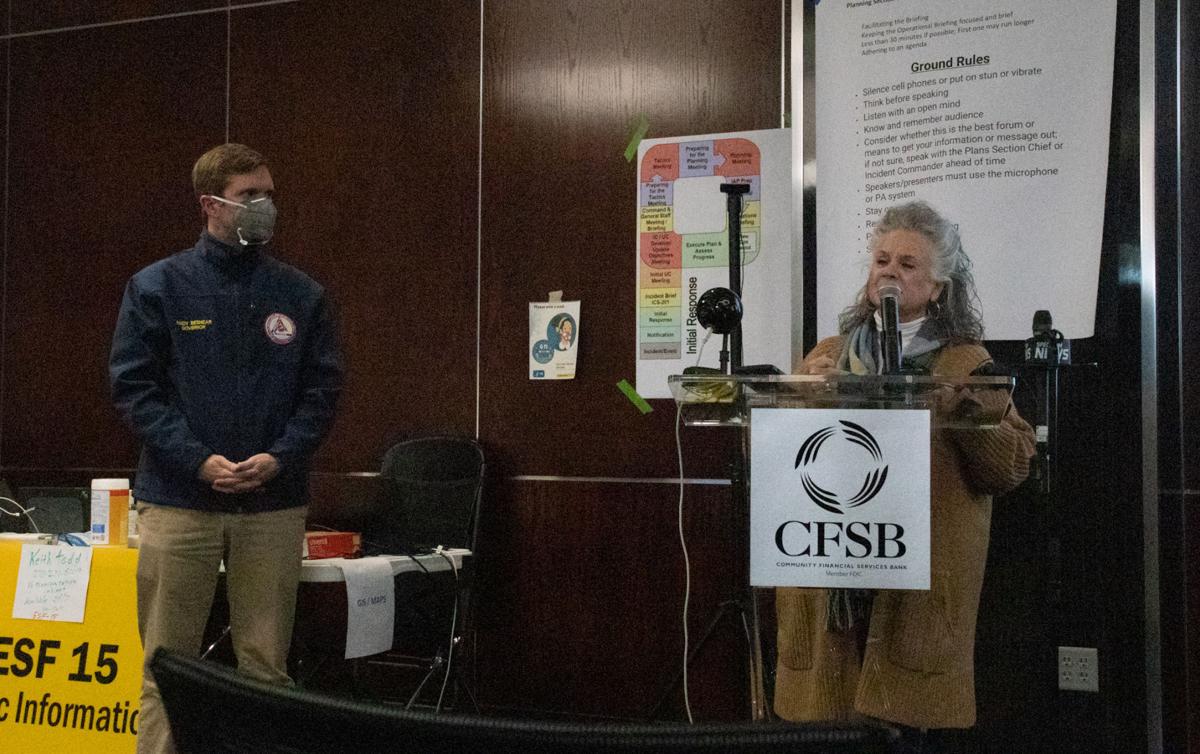 Kentucky Gov. Andy Beshear and Mayfield Mayor Kathy O’Nan address the crowd during a visit from the governor on Jan. 3. 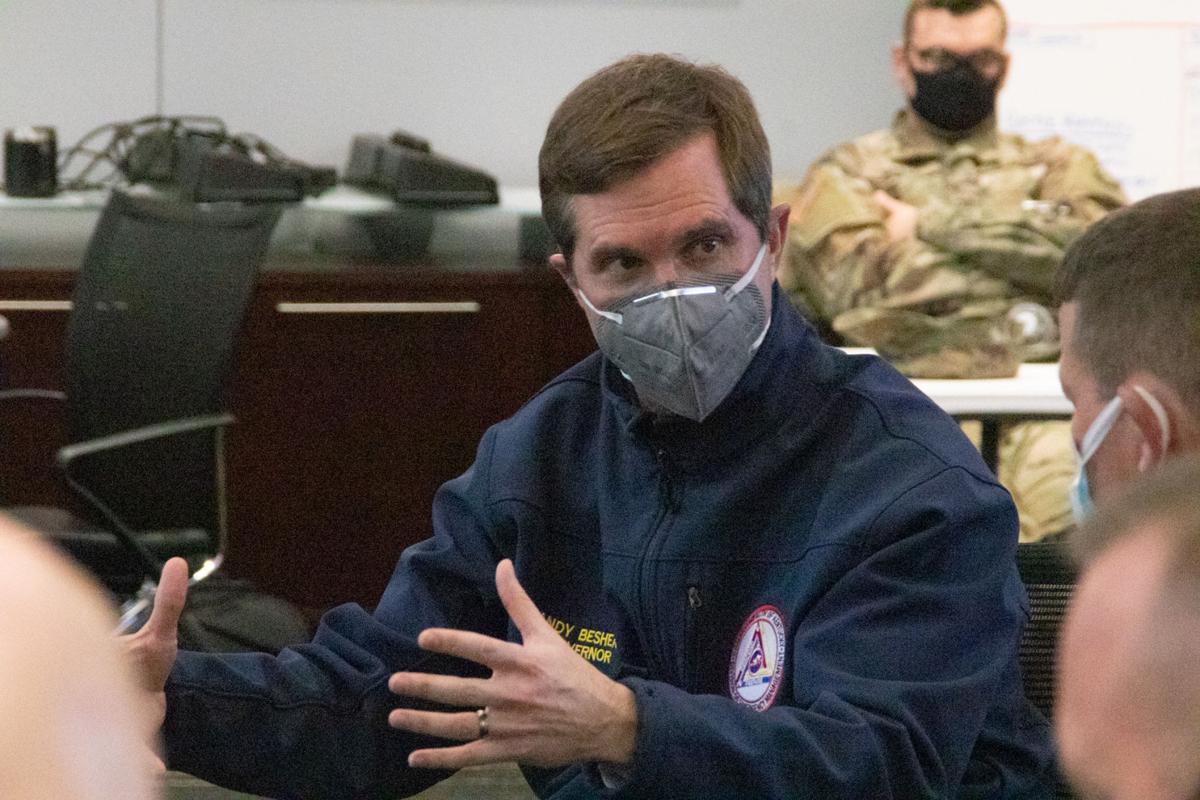 Kentucky Gov. Andy Beshear and Mayfield Mayor Kathy O’Nan address the crowd during a visit from the governor on Jan. 3.

As of Jan.3, Gov. Andy Beshear said he will be requesting the federal government to extend the 100% payment for debris and temporary housing from 30 days and requesting an additional 60 days after the destruction from the Dec. 10 tornado in Graves County.

“When we look at downtown Mayfield, we know it’s going to take more than thirty days and the costs are immense, exceeding one hundred million dollars to ultimately clean up to that degree,” said Beshear. “We have notified the federal government that the request is coming, and we have the full support of the Federal Delegation of Kentucky — and so we will be pushing forward with that important request.”

“We continue to see exceptional local leadership and amazing local cooperation from the cities to the counties to the state and federal government,” Beshear said during a press conference in Mayfield on Jan. 3. “I believe this has been one of the best examples of cooperation in trying to cut through any and all red tape in efforts to provide the very best for our families.”

Since devastation hit Mayfield and Graves County following the Dec. 10 tornado, local and state governments have been working to rebuild and serve storm victims in every way possible to help provide relief and normalcy to the best of their abilities.

In part of the displacement from the storm, local children have become a concern regarding mental health, physical health and more.

“Ensuring our kids that have been displaced get the services they need to go back to school,” said Beshear. “That they don’t fall behind, that we help with any natural emotional issues that result from the trauma that they have been through.”

“We want to begin getting them home,” Mayor Kathy O’Nan said. “As a former teacher, I know how very important that school routine is. As much as students grumble around it, that routine is what our school children from preschool to seniors need. We’ve been told the governor hopes to start getting them in as early as next week.”

Children in the area remain a top priority, though local businesses also have been brought up in regards to the Mayfield-Graves County economic system.

FEMA impersonators have yet again become a topic of discussion, unfortunately, at government briefings.

“Last week I got a letter stating that they had received an application from me,” said O’Nan. “There’s no way that could happen. Several of our friends have gotten them — Chief Jeremy Creason said he also got a letter like that. I do know it was very easy to report this though. The bottom of the letter will give instructions on who to call and what steps to take if this has happened to you. It was easy to take care of, however it’s just something else that people do not need to have to worry about at this time. It’s absolutely something to be looking out for.”

Residents of Mayfield-Graves County who have been displaced are worried about semi-permanent housing, and when they can expect to hear new information regarding their homes.

“What I’ve heard here today, and what I’ve been working with your judge here in Graves County with before, is how we can speed up getting people from hotels into a semi permeate housing — which would be a camper or an RV,” said Beshear. “That people know they can stay in for the months to come as the rebuilding continues. We are working on the state level to see all the different ways we can speed that up and we hope to have additional news as early as late this afternoon.”

Concluding his briefing, the governor released that SNAP benefits are going to start on Jan. 5, and those in need due to the recent disaster are beginning to apply. Currently, people who need disaster unemployment assistance can still apply. This applies to farmers and others who normally do not qualify.

“Due to the interruption of businesses, the state of Kentucky wants to be there,” said Beshear. “I hope me being here shows this and continues until the job is completely done.”

O’Nan addressed those of the community, wanting to give insight into just half of the feedback the community has received during this time.

“I want to tell the people of Mayfield what the New York State Emergency Management Incident Team said to us. I’ve always known this, you all probably have always known it — but it’s so good to hear people who are not from here say it — and these people being from New York, they really didn’t know us,” said O’Nan. “What they said was two things that will stick with me forever. The members of this team have worked on the 9/11 event, Hurricane Katrina, the high-rise apartment collapse in Florida — they don’t go unless it’s a major catastrophic event, and it hurts my heart to say that there was a real reason for them to be here.”

“You know, this is something we have always watched on television, this wasn’t going to happen to us. But it did, and we’re working through it,” said O’Nan. “They said that this was one of the worst they’ve seen hit a smaller area, yet they have never seen people who sprang so quickly to help their neighbors. They have never seen in any incident that they have managed the most resilient people than the ones they have seen in Mayfield and Graves County. I knew that. I know we haven’t had anything to this extent, but we have had some events that have broken our hearts — and I know what we do. This time we did it, and the whole world got to see it. I’m thankful for that. We take care of our own.”

Wrapping up, O’Nan offered a statement of hope for the city of Mayfield.

“We will be taken care of until we can 100% take care of ourselves. And that’s not tomorrow, but it will be someday.”