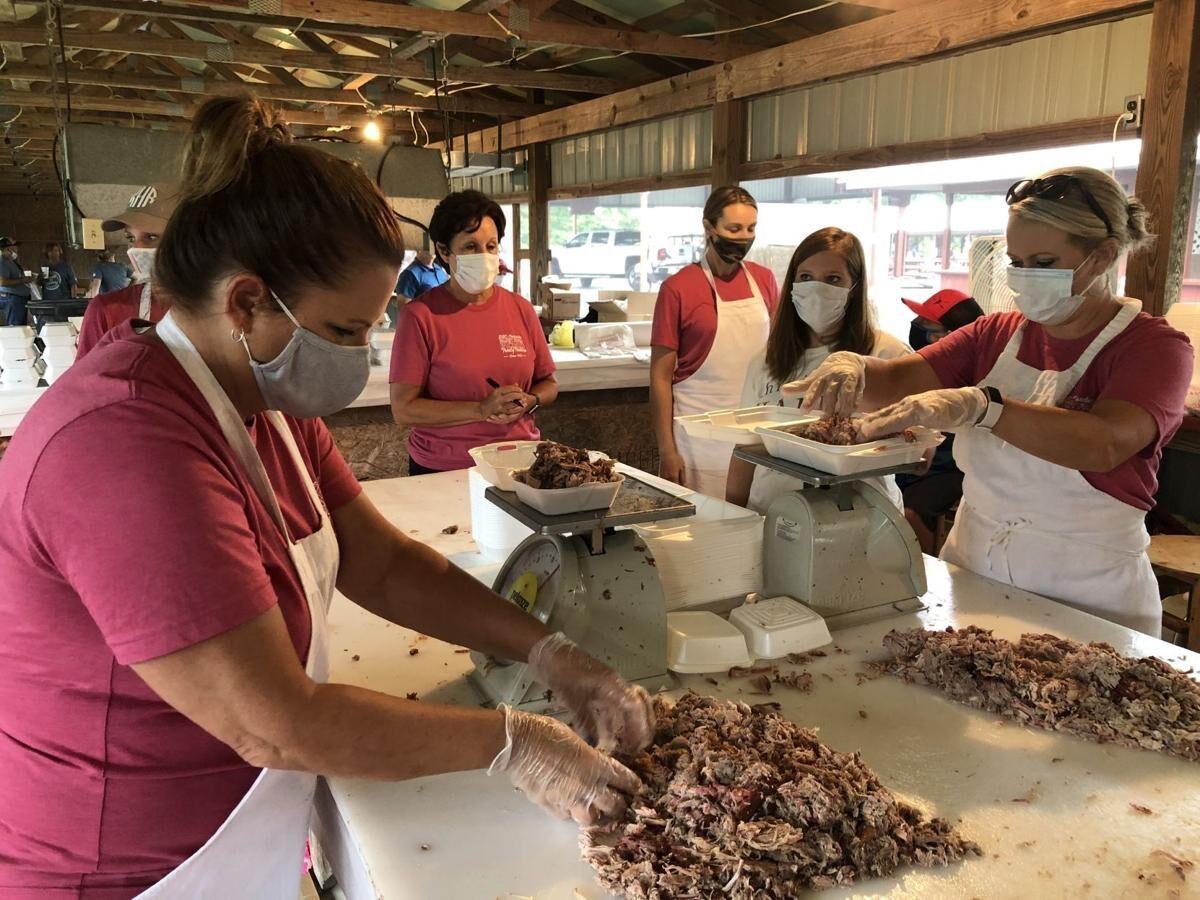 Sherry Hayden (left) and Whitney Hayden (right) gather chopped pork for carry-out orders during last year's 140th Annual St. Jerome Fancy Farm Picnic. The event, which is a fundraiser for the local Catholic parish, was scaled down last year due to the COVID-19 pandemic but organizers plan on a more traditional event this August.

Sherry Hayden (left) and Whitney Hayden (right) gather chopped pork for carry-out orders during last year's 140th Annual St. Jerome Fancy Farm Picnic. The event, which is a fundraiser for the local Catholic parish, was scaled down last year due to the COVID-19 pandemic but organizers plan on a more traditional event this August.

With what organizers describe as “cautious optimism,” plans are being made to have the 141st St. Jerome Fancy Farm Picnic in its traditional entirety on Aug. 7, 2021.

The first Saturday in August is the annual date for the picnic, once dubbed the “largest picnic in the world” by the Guinness Book of World Records, and which still attracts family of current and former residents from across the country to the small Graves County community. The event is perhaps more widely known for the lively political stump speeches given by local and state officials as well as some of the most powerful leaders in the nation’s capital.

Last year, the COVID-19 pandemic limited the picnic’s typical fare. The grounds alongside St. Jerome Catholic Church were mainly empty. Purchases of barbecue pork and mutton were available only for takeout. The political pavilion was quiet with no partisan barbs. Picnic chairman Andy Hayden said the event, a fundraiser for the parish, took in around 50% less than a typical picnic year.

But with the COVID-19 positivity rate declining, he and picnic organizers believe 2021 will offer a more traditional event.

“Hopefully things will continue to improve, or at least stay the same as far as the positivity rate,” Hayden said. “We’re all centered on getting back to normal, including the political speaking and hopefully the big meal at the KC Hall and everything.”

Planners have already ordered a new truck to be raffled off as one of the larger fundraising efforts after a Polaris Ranger utility side-by-side vehicle was the prized raffle item last year.

Hayden said they have even looked at the bright side from 2020’s scaled-down picnic. They were able to see how they can adjust their events – from Bingo and games to food sales to the political speaking – if needed, and also use technology through online ticket sales.

“We’re planning for a full-on picnic, but we know how to successfully run one that has to be scaled down with what we did last year,” he said. “If something were to happen or come up again, whether it’s a different variance of the virus or whatever, we fell we can pivot very quickly and relatively easy.”

As the picnic moves back toward normalcy, a change was announced on the political speaking committee. Mark and Lori Wilson, that event’s co-chairs and organizers since 2005, have stepped down and committee member Steven Elder has taken on the chairman role.

The Wilsons followed long-time organizers Algene and Mary Vernon Goatley with managing the picnic’s political aspect which has ranged from novice politicians to presidential candidates.

Mark Wilson has been a familiar face at the speaker’s podium to kickoff the speaking event, while his wife, Lori, has worked behind the scenes with coordination and organizing. All told, Mark Wilson said the work goes beyond that first Saturday in August.

“It’s maybe not on a daily basis, but several days a week you’ve got to spend some time, either on the phone or email, to start coordinating,” he said. “It’s on my mind 12 months a year.”

Wilson said Elder, who has worked on the committee over the past four or five years, has a similar interest in politics which will serve him and the picnic well.

“He’s brought it to the pinnacle, as far as social media,” Wilson said. “This old goat can do it, but he’s got a lot of good ideas. He’s got a good network, same as I do, and he’s excited about it.”

Elder, whose family has worked the barbecue pits and selling of meat by the pound at the picnic, recalled growing up and sneaking off from his job with his family to listen to the political speeches by the likes of former U.S. Senator and Kentucky Governor Wendell Ford and others.

“I remember when the big awning wasn’t there and you’d just sit out in the hot sun,” Elder said. “I’ve kind of grown up in it and having the opportunity to help Mark and assist has been a dream come true. I’m excited to make it full circle from a kid running around at the bottom of the barbecue pit to welcome some of the biggest leaders from across the country.”