Superintendent Matthew Madding’s presentation was given at the lectern behind a wall of Lowes Elementary School students. 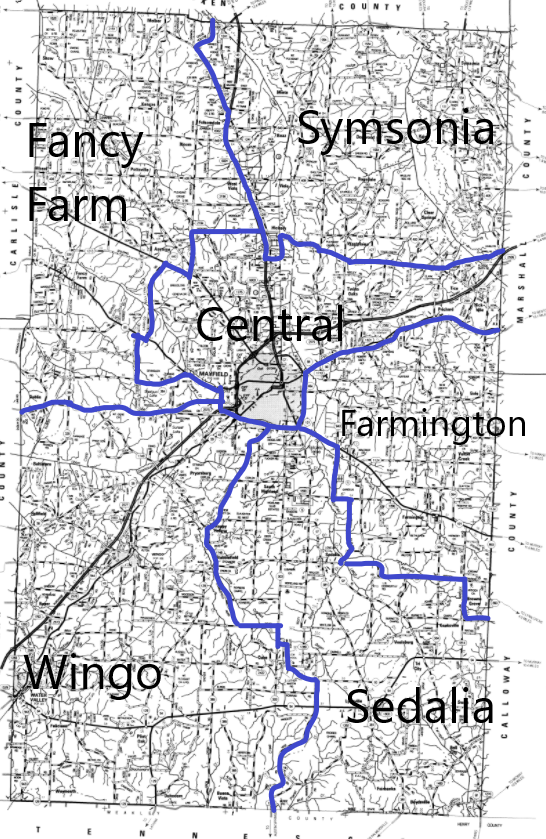 As the Graves County Board of Education inched closer to a vote on Lowes Elementary School’s ultimate fate, the school’s students stepped down from the bleachers and sat in front of the lectern.

Superintendent Matthew Madding’s presentation was given at the lectern behind a wall of Lowes Elementary School students.

As the Graves County Board of Education inched closer to a vote on Lowes Elementary School’s ultimate fate, the school’s students stepped down from the bleachers and sat in front of the lectern.

Madding made a planned presentation at Thursday’s board meeting explaining why he felt the best course of action was to close the school. He noted he’d sent his presentation out to board members a week in advance, allowing them time to review the material and make an informed decision.

One of his points addressed the three-phased renovation plan presented by Lowes parents in January. The plan would have each phase projected under the Kentucky Department of Education’s $7.06 million spending limit. His concerns regarded the total estimated project cost ($15,290,850) and the listed need for the facility being approximately $10,815,694.

For the construction of a brand new facility, it was estimated at $11.2 million, which includes construction, contingency, fees, equipment and demolition. He noted this does not include the approximate $400,000 needed for a mandatory storm shelter. Furthermore, the spending limit for new construction is between $8.8 million and $10.14 million. Since Lowes has fewer than 300 students (221 currently enrolled), this course of action would also require the Kentucky Board of Education’s approval, which Madding noted is rarely granted.

He also addressed concerns that absorbing Lowes’ students into surrounding schools would bloat classrooms and negatively impact education. Madding said that there actually was room at Symsonia (255 current enrollment out of 400 maximum capacity), Fancy Farm (170 out of 300), and Central (444 out of 525). Madding said he doesn’t anticipate these numbers increasing.

Madding also said that enrollment has declined district-wide since 2006 from 4,571 to 3,748. Lowes enrollment has also dropped over that time from 306. He added declining enrollment lead to direct loss in revenue, such as for fiscal year 2020 when $750,000 was cut from the budget. Operating costs to keep Lowes open is $267,000 a year, which, he noted, doesn’t include the cost of teachers, food service, bus drivers or instructional materials.

As part of his recommendations, the Lowes district will be divided among Fancy Farm, Symsonia and Central Elementary Schools. A letter will be sent to Lowes families on Monday to notify them of their new school assignment. A family night is scheduled for April 22, followed by a school day visit on April 28.

Additionally, a survey was to be sent to Lowes employees Friday, which would have allowed them to select their top three preferred work locations. Though they will be assigned to specific locations, they can apply for other openings in the district as they occur. Madding noted that some non-tenured employees across the district would receive non-renewal letters due to declining enrollment.

As the board prepared to vote, tensions escalated as some members of the crowd could be heard calling for board members to resign. Before the actual vote, Lowes Elementary students walked down from the bleachers and sat in front of the lectern to face the board.

Board Chairperson Kelly Thurman made a statement to those in attendance, including the students sitting across the gym floor from her. She assured them that even if their school closes, they would get through this.

“Their buildings are in much better shape than yours is. Unfortunately, it costs a lot to be able to make yours as good as theirs. And we are not going to have that much money for a while. You deserve to be in a building as good as theirs,” Thurman said to the children. “So tonight, I am choosing to give the students of Lowes something better than you have right now.”

Thurman, along with board members Ronnie Holmes, Julie Moffitt and Joni Goodman, voted in favor of closing Lowes Elementary School. Board member Kenneth House was the only dissenting vote.