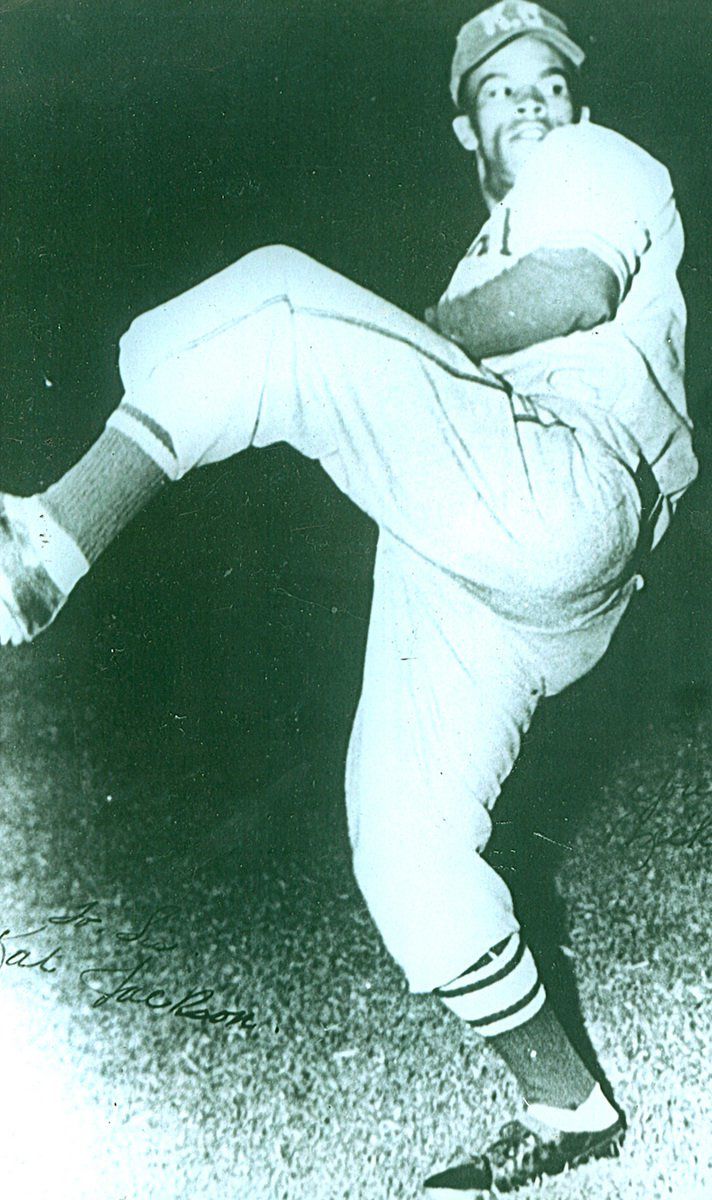 Mayfield native Mickey Stubblefield is pictured winding up to throw a pitch for the Kansas City Monarchs the way he was mentored by Negro League legend Satchel Paige. 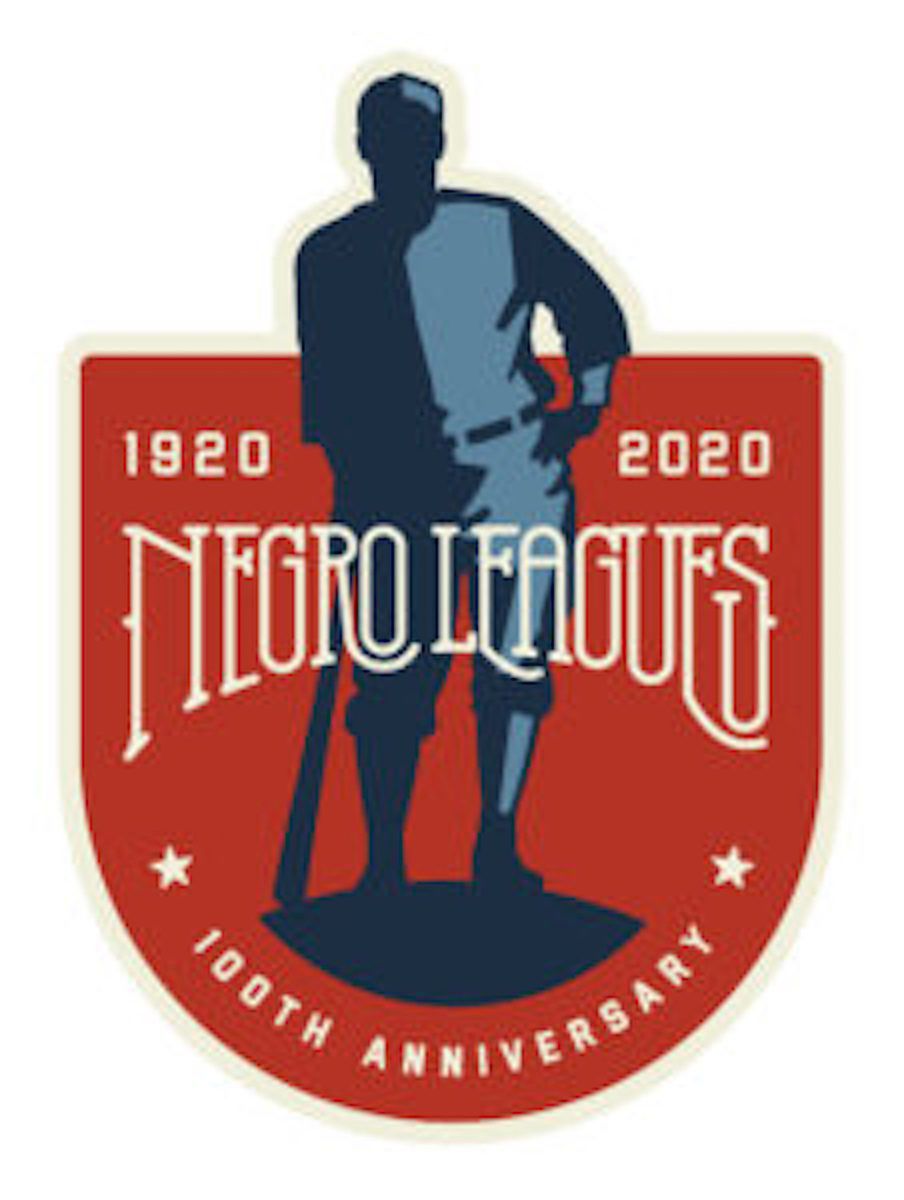 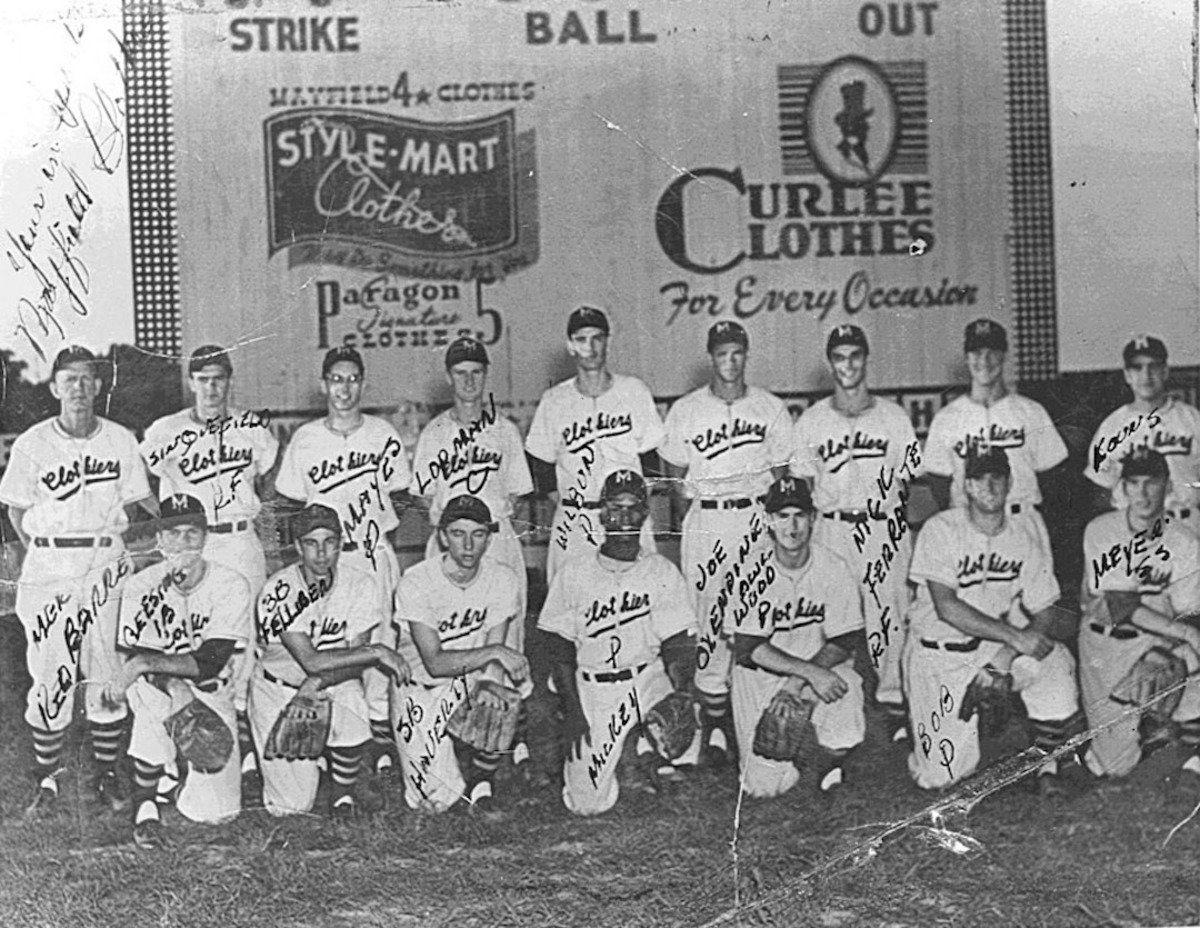 The 1952 Mayfield Clothiers baseball team was a farm club of the Pittsburgh Pirates and part of the Kentucky-Illinois-Tennessee "Kitty" League. Mickey Stubblefield was the first African-American player signed by the league. He is pictured on the front row in the center. 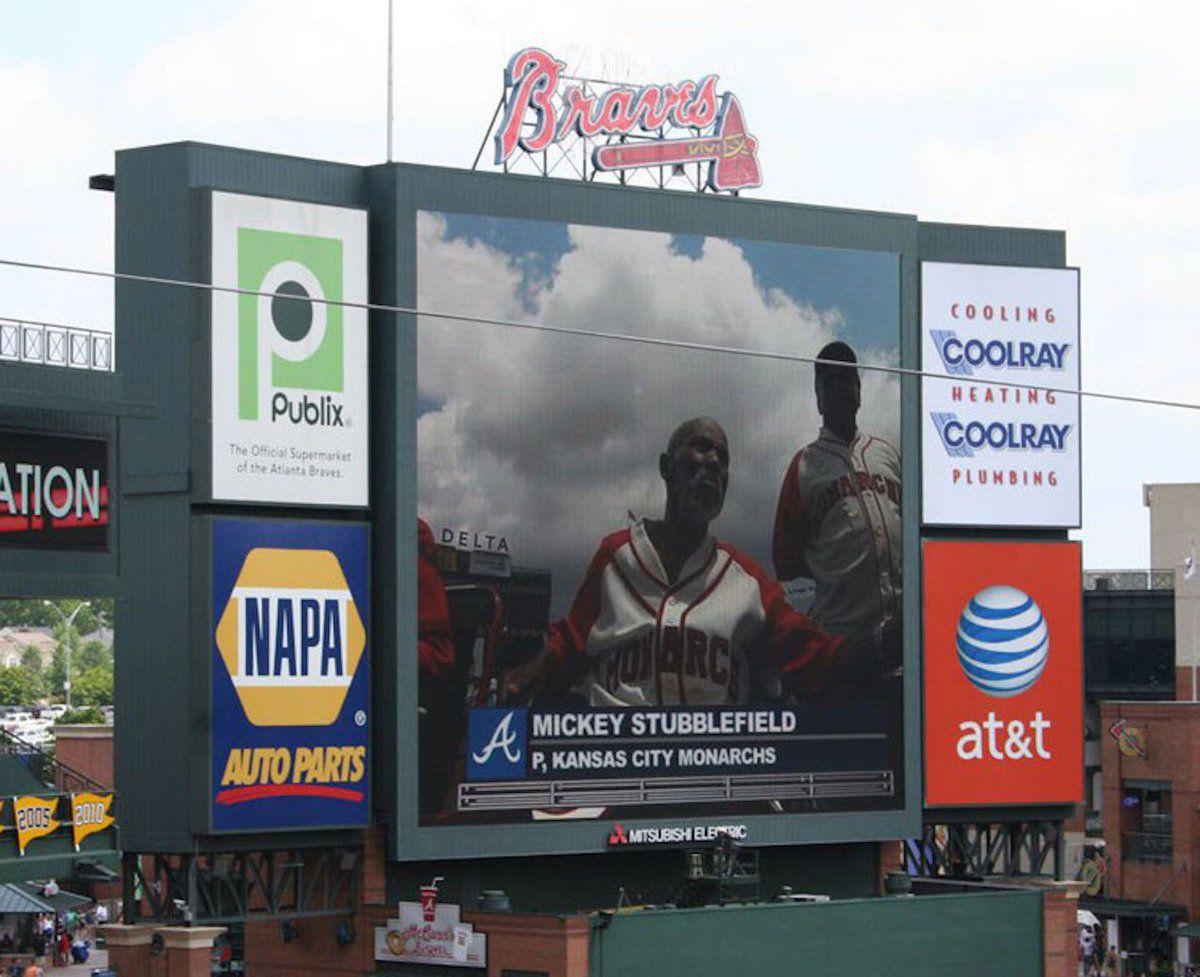 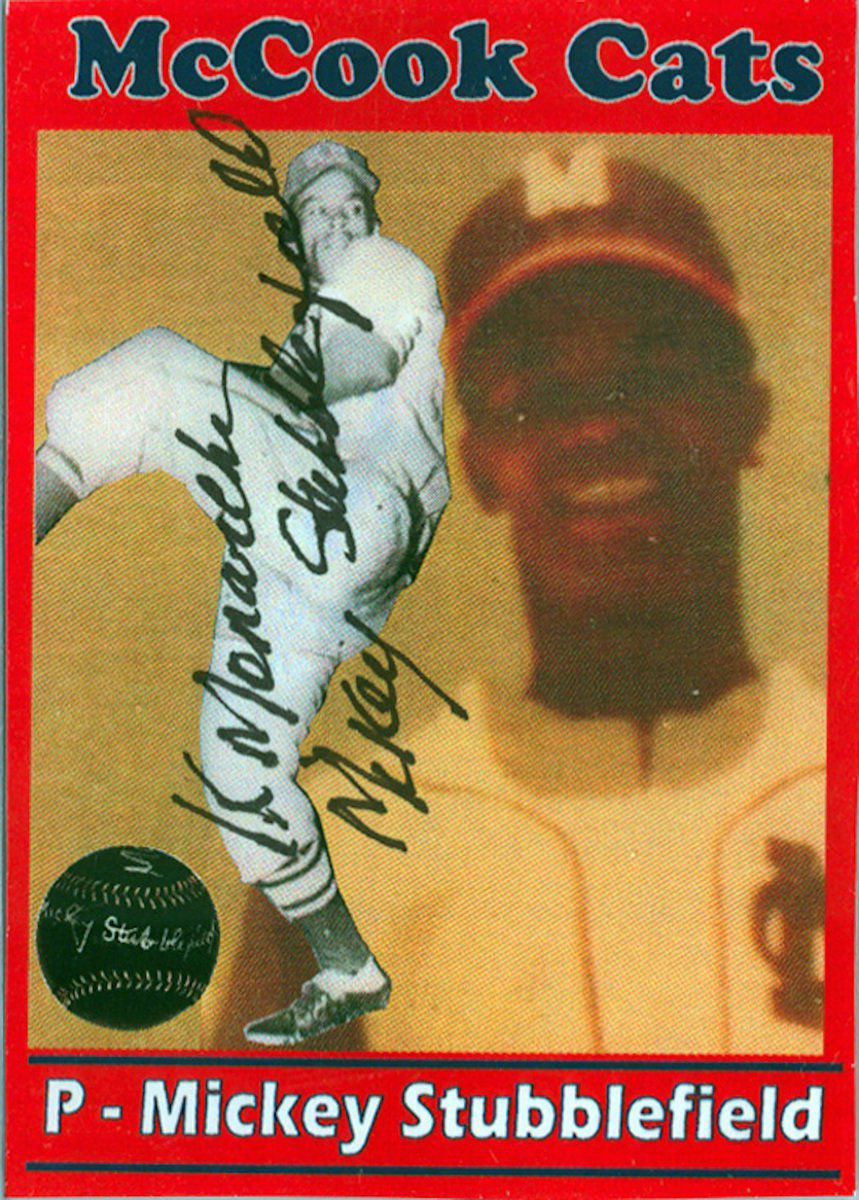 Mayfield native Mickey Stubblefield is pictured winding up to throw a pitch for the Kansas City Monarchs the way he was mentored by Negro League legend Satchel Paige.

The 1952 Mayfield Clothiers baseball team was a farm club of the Pittsburgh Pirates and part of the Kentucky-Illinois-Tennessee "Kitty" League. Mickey Stubblefield was the first African-American player signed by the league. He is pictured on the front row in the center.

It was called "shadow ball." Similar to shadow boxing -- where a fighter would go through the motions of punching and weaving against his shadow to prepare for a bout - baseball players would zip an invisible ball around the infield and make catches and tags with such speed and precision, people thought they were throwing around an actual baseball.

For much of the first half of the 20th century, shadow ball typified Negro players; they were "playing baseball" but not playing baseball. The Major Leagues were out of reach at that time. Even after Jackie Robinson, many black players faced hostilities at away ballparks and sometimes even at home.

Mayfield's Wilker H.T. Stubblefield picked up the name "Mickey" because of his 5-foot-9 stature and big, hand-me-down shoes that reminded folks of the Disney character Mickey Mouse. And Mickey -- the man -- loved baseball. And like so many of his predecessors and contemporaries, it helped carry him through times of prejudice he encountered in the U.S. Navy during World War II and while playing for the Omaha Rockets, Kansas City Monarchs and McCook (Nebraska) Cats.

It carried Mickey Stubblefield long enough that he eventually broke the color barrier of the Kentucky-Illinois-Tennessee (Kitty) League in the early 1950s when he was signed to pitch for the Mayfield Clothiers ballclub. Ironically, Stubblefield was signed by Frank Rickey, a scout of the Pittsburgh Pirates whose brother was Branch Rickey, who broke Major League Baseball's color barrier with the signing of Robinson in 1945.

The racism that Stubblefield and others encountered during his playing days was also like shadow ball; it bothered him even though he pretended that it didn't.

"A lot of black players, they still couldn't go in with the white players and I remember Dad saying they'd have to eat in the back of the restaurant outside," recalled one of Stubblefield's daughters, Mary Arvin.

February, which is designated Black History Month, also coincides with the 100th anniversary of the formation of Negro League baseball. Both the Negro League Baseball Museum, based in Kansas City, Missouri, and Major League Baseball teams have been working to keep the lore and legacy of teams and players - like Mickey Stubblefield - alive.

The movie features interviews with former Negro League players about their experiences. The museum also displayed a traveling photo exhibit, titled "Shades of Greatness" to highlight black baseball in America.

Arvin said hearing the players in the documentary reminded her of her father's stories.

"They were so enthusiastic about playing ball. I recalled Dad talking like this," she said after the screening. "They would play a game and they would get back on the bus and travel and play a game again that night. They had no access to showers. They had no place to sleep.

"They were sweaty, dirty, clothes dirty, and still go continuously like that," Arvin added. "It broke your heart, but they said they forgot all about that because they wanted to play baseball. That was their passion."

Family was also Stubblefield's passion. The fifth child of Harrison and Mary Wilker Stubblefield, Mickey's parents had both died by the time he turned 12. Later, he met Olelia Hartsfield, who grew up in Farmington and Mayfield and who would eventually marry Mickey.

They moved to Nebraska, Mrs. Stubblefield said, and lived a peaceful life thanks to her husband's status as a ballplayer with the McCook Cats independent team.

Arvin recalled the magic of just seeing her father throw a ball in the air.

"Somehow, he would twist his body and throw a ball way up in the air, going straight up to where you could almost hardly see it, and it would come back down and he'd catch it," she said.

Prior to that when Stubblefield played for the Kansas City Monarchs, he picked up a few tricks - including his curveball, twisting wind-up and high-kick delivery - from fabled hurler Satchel Paige, who played for 22 years in both the Negro and Major Leagues and who was inducted into the National Baseball Hall of Fame in 1971.

His looks and style even earned Stubblefield the nickname "Lil' Satch."

Stubblefield's connections to some of the Negro League's greats also include playing with and for players like speedy James "Cool Papa" Bell, Horace Garner and Ernie "Mr. Cub" Banks.

The Mayfield Clothiers team inked Stubblefield in June 1952, according to an account in the Mayfield Messenger. His first game on the mound was against the Paducah Chiefs. The Clothiers won, 5-4.

Well beyond his playing days, Mickey Stubblefield died in his home in Smyrna, Georgia at the age of 86 on Feb. 19, 2013. That was 83 years and six days after the Negro Leagues formed. He was also posthumously inducted into the Nebraska Baseball Hall of Fame in 2014.

Twenty years earlier, some of his memorabilia was included in the new Negro Leagues Baseball Museum. And even then, he knew the importance of remembering the trials and triumphs of those early black baseball teams and players.

"This is something that I'm really proud of," he told this reporter at the time. "Baseball then wasn't what it is today and people need to see what it was like in the old Negro Leagues."

Eric Walker is news editor for The Mayfield Messenger. He can be reached at ewalker@mayfield-messenger.com.