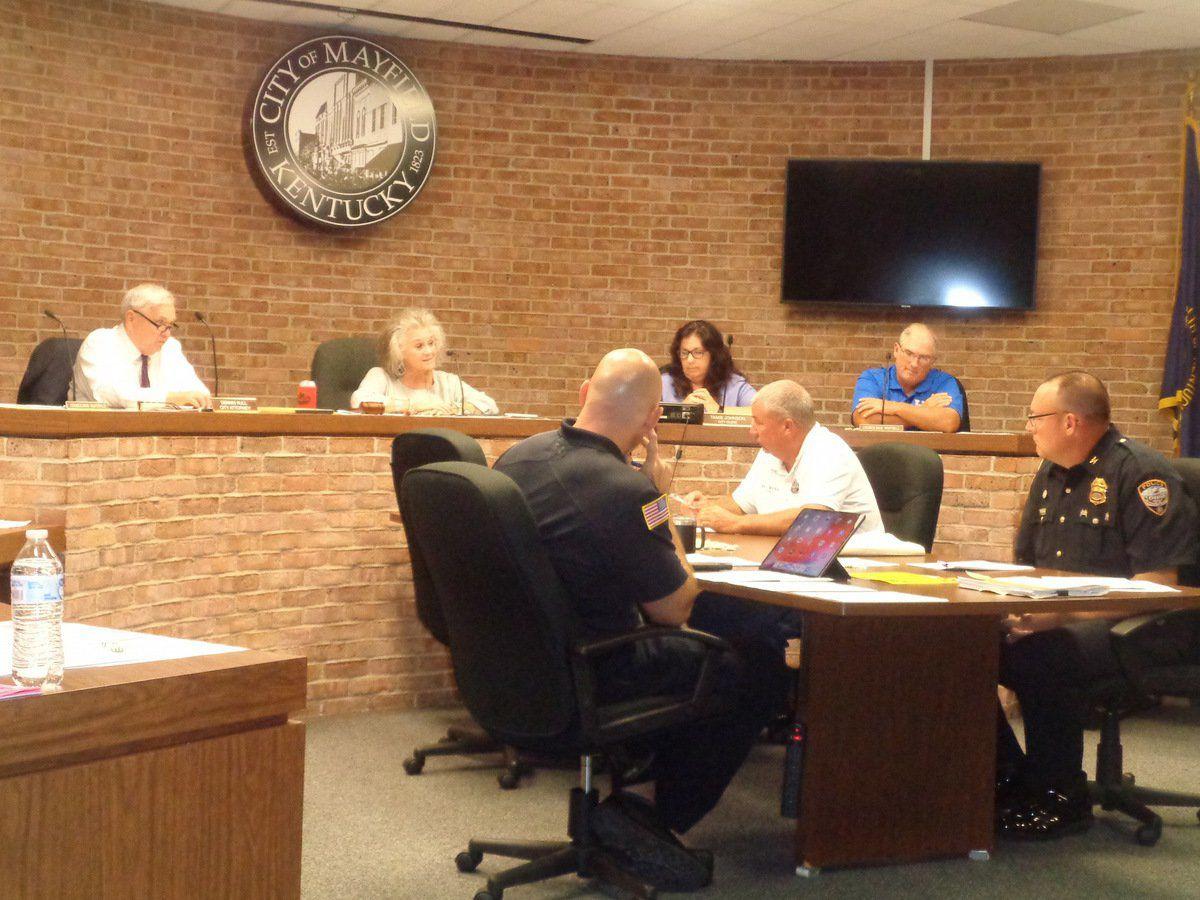 Mayor Kathy O'Nan (second from left) and Public Works Superintendent Russ Brower (third from right) have a conversation during reports from department heads near the conclusion of Monday's Mayfield City Council meeting. 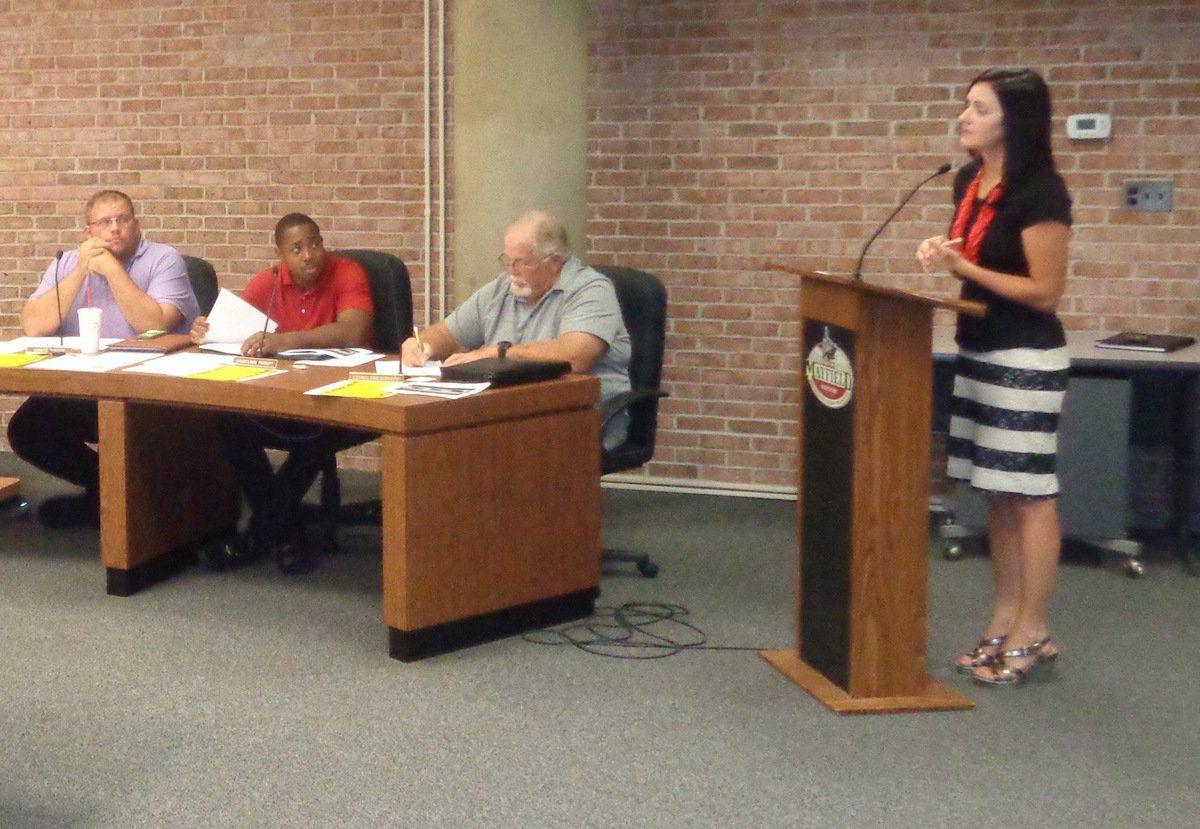 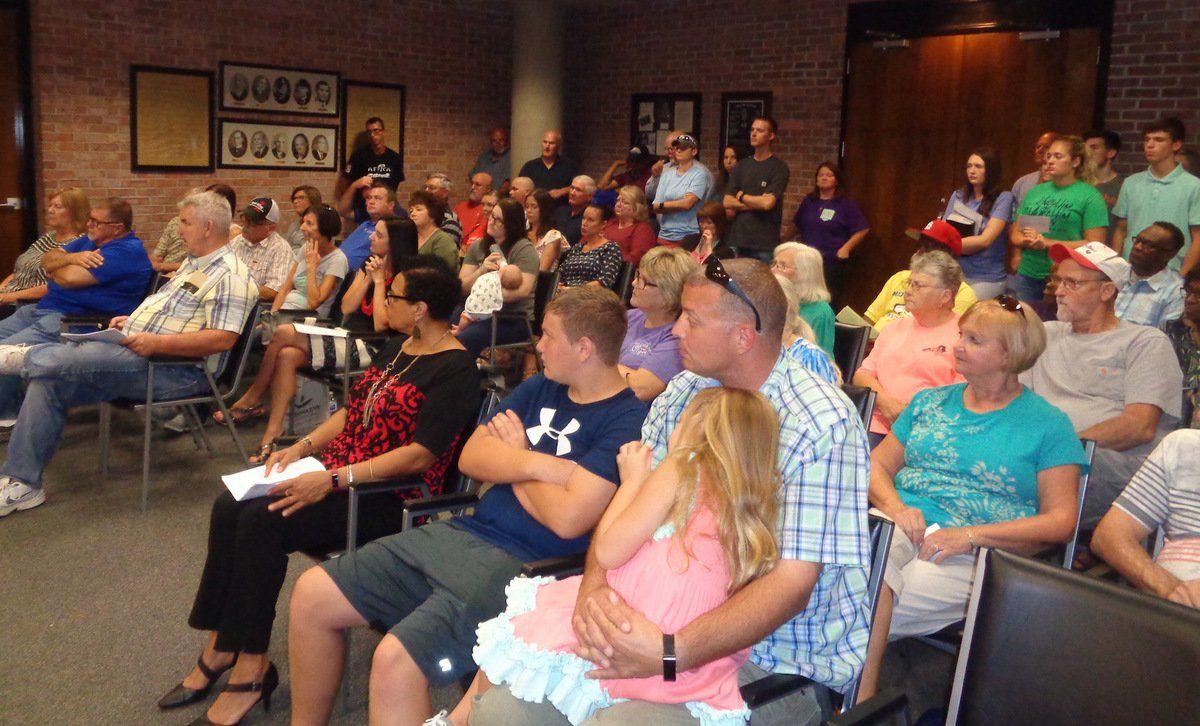 A standing-room only crowd fills the Mayfield City Council chambers at City Hall for Monday evening's meeting. City fire marshal William Higginson allowed the maximum of 91 people inside the chambers and up to 41 in an overflow area in the lobby. Thirty-six people were in the overflow area. Twenty-four people, each limited to three minutes each, spoke on the alcohol issue, taking up nearly an hour and a half.

Sharon Clack speaks about her 4-year-old son who was killed by a drunk driver during Monday's Mayfield City Council meeting. Clack was one of 22 people who spoke against the city allowing quota retail drink licenses to be available, allowing businesses to offer alcohol.

Mayor Kathy O'Nan (second from left) and Public Works Superintendent Russ Brower (third from right) have a conversation during reports from department heads near the conclusion of Monday's Mayfield City Council meeting.

A standing-room only crowd fills the Mayfield City Council chambers at City Hall for Monday evening's meeting. City fire marshal William Higginson allowed the maximum of 91 people inside the chambers and up to 41 in an overflow area in the lobby. Thirty-six people were in the overflow area. Twenty-four people, each limited to three minutes each, spoke on the alcohol issue, taking up nearly an hour and a half.

Sharon Clack speaks about her 4-year-old son who was killed by a drunk driver during Monday's Mayfield City Council meeting. Clack was one of 22 people who spoke against the city allowing quota retail drink licenses to be available, allowing businesses to offer alcohol.

Businesses may offer alcohol as the result of an 8-1 Mayfield City Council vote Monday that also opens the way for bars.

Councilman Chuck Whitnell cast the lone dissenting vote. Councilwoman Jana Adams was absent. Mayor Kathy O'Nan said she will sign the ordinance within 10 days, allowing it to become law within the city. In anticipation of the vote, O'Nan said she had arranged for an open meeting with state alcoholic beverage control officers at 1 p.m. Oct. 2 at City Hall. She encouraged anyone with questions to attend but noted the time for debating the issue is over.

Some existing business owners approached the council earlier this year, asking for the city to rescind its previous decision prohibiting quota retail drink licenses. Examples given for the need included potential sales at a salon, spa, art gallery and clothing boutique. No bars requested the change.

The ordinance also allows businesses to begin alcohol sales at noon on Sundays instead of 1 p.m. Those serving alcohol will have 90 days to get beverage service training instead of 30 days. The ordinance does not extend evening sales hours past midnight, as a former tavern owner had requested and other bar owners have suggested would be necessary to make their businesses successful after restaurants have closed for the night.

All the ordinances will become effective upon publication of the legal notice in The Mayfield Messenger on Friday.

William Higginson, serving as the city's fire marshal, gave everyone present a number, allowing the maximum 91 people inside the council chambers. He allowed up to 41 into an overflow area in the main lobby, where a speaker was set up. He gave out 36 numbers in that area.

Jodie Hansen, Graves County Economic Development's vice president for community and business development, was the first of 24 speakers who spoke before the council on the issue. Two were for the move and 22 were against.

Hansen was one of those in favor of the measure and said she represented a group of seven people.

"Alcohol is here, it's legal, and we are simply seeking to reduce the restrictions on businesses," Hansen said.

She called the lack of quota retail drink license availability an impediment to growth. "These restrictions make recruiting a hotel challenging," she said.

Tom Curtsinger, owner of Fancy Farm Winery, was the other speaker in favor of the licenses.

"One small business grows others," he said, noting relationships he has with other entrepreneurs.

Those speaking against the licenses included several people opposed to any expansion of alcohol sales on religious and moral grounds, with some noting that God would hold council members who voted for the measure accountable.

"The availability of alcoholic beverages is a scourge on any community that allows it to occur," said David Hitchcock, who represented Enon Baptist Church.

He called for total abstinence of alcohol and said the ordinance would "turn the highways and byways into slaughter pens."

William Fleming took a different approach, saying he was there to show the council the love of Jesus Christ and that he simply encouraged the council to listen to God and do as they felt God led them.

Some people had personal reasons to caution against potential ill effects of alcohol consumption. Sharon Clack talked about the day years ago when a man driving under the influence of alcohol ran off the road and into her yard, killing her 4-year-old son as he sat playing in his sandbox.

She believed passing the ordinance means more drunk drivers would be on the road and that it was also a bad example to set for children.

"Is that how you want our children to be raised, just because it's there and it's legal?" she asked. "It's not OK."

Rocky Lucy said his wife was killed by drunk driver who caused a head-on collision on a bridge 23 years ago.

"If you're for alcohol, you need to get Jesus in your heart," he said.

Mickey Fowler, owner of Fowler's K&N Root Beer Drive-In, and Blake and Ashley Kendall, owners of A&B Barbecue, said Mayfield businesses do not need to serve alcohol to be successful. Fowler also owns a faith-based rehabilitation center for men in Mayfield and is involved in ministry at the Graves County Jail, as well as preaching in Pryorsburg. He talked about how alcohol has led some of those he has counseled into bad acts and added he believes jail overcrowding would be worse if alcohol was more readily available.

Blake Kendall was one of those who called Mayfield a safe haven, something he thinks would change if more businesses can serve alcohol.

Some teenagers also spoke about how they see alcohol affecting their futures. Each person under 18 had to have the consent of a custodial parent to speak before the council.

"Would you rather make more money or save lives?" 14-year-old Jenna Shupe asked.

Isaac Lockwood, 17, said he has heard stories from his father, a retired state police trooper, about how alcohol has impacted people's decisions.

"I've seen those around me get affected by what alcohol does to people, and none of it is good," he said.

Unlike many, Troy Hutson said he was not against all alcohol sales. "We're not here because of the Chamber's mimosas at their parties," he said. "We're here because of bars."

He added, "Just because no bars have applied right now doesn't mean one won't come in tomorrow if you pass this."

Although limited to three minutes each, the speakers took up nearly an hour and a half of the meeting.

Ultimately, before voting, Whitnell was the only council member to speak on the issue publicly.

"My opinion on this is what small benefit we'd get from alcohol sales wouldn't outweigh the pain the families would suffer or what the community would have to deal with," he said.

Myers said his vote in favor of the ordinance was because there had been few changes to it. Following the meeting, he expressed confidence that the city could contain any problem issues by requiring applicants to obtain a conditional use permit to operate a business that serves alcohol.

Jeremy Creason, who oversees the merged fire and codes departments, has said previously the city has wide latitude in granting or not granting the permits, considering such issues as parking availability and the effect on surrounding businesses.

Following reports from city department heads, councilman Johnny Jackson also noted that in the police department's report for August, only six cases of driving under the influence of alcohol or drugs and seven cases of public intoxication were reported, something he said he hoped would allay the fears of many of those who spoke at the meeting. Not all of those cases may have involved alcohol, as those offenses may include other intoxicating substances.

In other business Monday, the council:

The tax rate will bring in roughly $69,000 more than if the city had taken the compensating rate, as property values within the city have increased, clerk Tamie Johnson said. The city earmarked that revenue for public safety.

The tax rate must be approved on second reading next month to go into effect. Before voting, Myers said he was OK with not lowering the tax as the city could be facing up to a $500,000 pension liability in the future because of state legislation changes.

• Heard from Andrew Ellison, who has applied for a grant to fund a $175,000 apartment complex on blighted property within the city. Ellison said he should know in November if he received the grant, although he believes his chances are favorable. If obtained, he said construction would begin in the spring. In August, the city donated vacant land at 418, 422 and 424 Water St. to Mayfield Neighborhood Development LLC, Ellison's company, for the project.

"We're looking to do way more than this," Ellison told the council Monday. He added, "We're looking at potentially a $1.2 or $1.3 million project for our city (in the future)."

• Heard from Public Works Superintendent Russ Brower that the city's next limb pickup will begin on Sept. 30 and last through the first two weeks of October.

• O'Nan also presented a key to the city to Arie Yvonne Parrott, newborn daughter of councilman Derrick Parrott, who was born in St. Louis. O'Nan said the key to the city makes her officially a citizen of Mayfield.