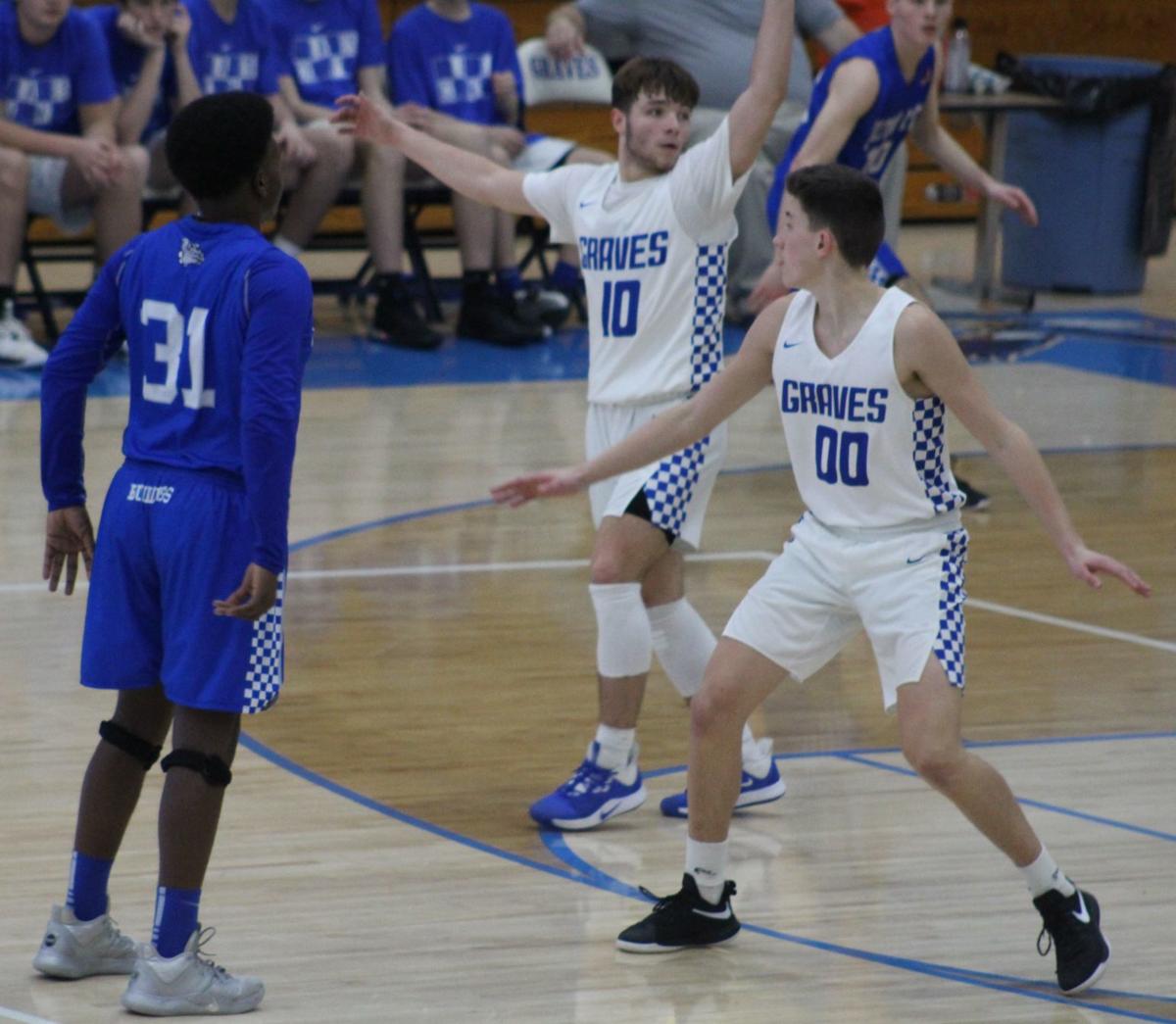 Eagle guards Aydan Flint (00) and Jameson Chalker (10) set the Eagles defense during a home game against Fulton City on February 15.

Graves County forward John Ben Brown goes up for a lay-up against Marshall County during the Eagles' first round game in the First Region tournament on March 4.

Eagle guards Aydan Flint (00) and Jameson Chalker (10) set the Eagles defense during a home game against Fulton City on February 15.

Graves County forward John Ben Brown goes up for a lay-up against Marshall County during the Eagles' first round game in the First Region tournament on March 4.

The Graves County Eagles’ 2019-20 season will be best known for its ups and downs and unfortunate shortcomings.

The Eagles returned just one player with varsity experience from their 2018-19 ballclub and inexperience shown through time and time again throughout the season.

Despite six-year head coach Josh Frick’s humongous task ahead, the Eagles managed to fight through adversity and put together a solid season of basketball.

In December, Graves hit a rough patch right out of the gate as they started the season 1-5 before stringing together three consecutive wins including a championship victory in the KME Christmas Classic at Trigg County on December 21.

Standing at 4-5, the Eagles had yet another tall task ahead of them as they set out for their annual post-Christmas tournament in Florida on December 27.

The Eagles dished out three hard fought contests but ultimately left the sunshine state with no wins to show for it as Graves prepared to rebound at their CFSB New Years Bash tournament.

Graves finished 1-2 after the weekend, bringing its record to 5-10 heading into regional play.

Things would only prove more difficult for the Eagles as First Region play began.

Graves dropped their first three regional matchups to McCracken County, Mayfield and Marshall County but rebounded like they only knew how with a 2-1 showing in the Superman Classic at Massac County to pick up a fifth-place finish.

The Eagles began to play some of their best basketball of the season at the start of February, taking down a talented Calloway County team at home before dropping a pair close games to McCracken and Marshall, two tight games that proved Graves was not a team to take lightly down the stretch.

In addition to senior forward Seth Thomas’ stellar play all season long, senior guard Jameson Chalker began to find his place in the Eagles’ offense at the end of the regular season, churning out back-to-back 17 and 22-point performances in wins over Mayfield and Fulton City.

With a first round bye in the Third District tournament, the Eagles earned themselves a chance to break the 1-1 season tie with the Mayfield Cardinals in the championship game on Feb. 27.

Despite an explosive start, Graves fell into foul trouble in the second half as the Cardinals fueled a comeback victory to capture their first back to back district titles in over 25 years.

With what was easily their tallest task of the season, the Eagles drew Marshall County in the first round of the First Region tournament.

Graves fought and clawed like they had all season long against the Marshals but it wasn’t enough as the Eagles saw their season come to an end at 12-20.

Although they’ll lose their top scorer in Thomas and solid guard play from Chalker, the Eagles will look to continue to be a tough out next season as they reload for another run at a First Region title.