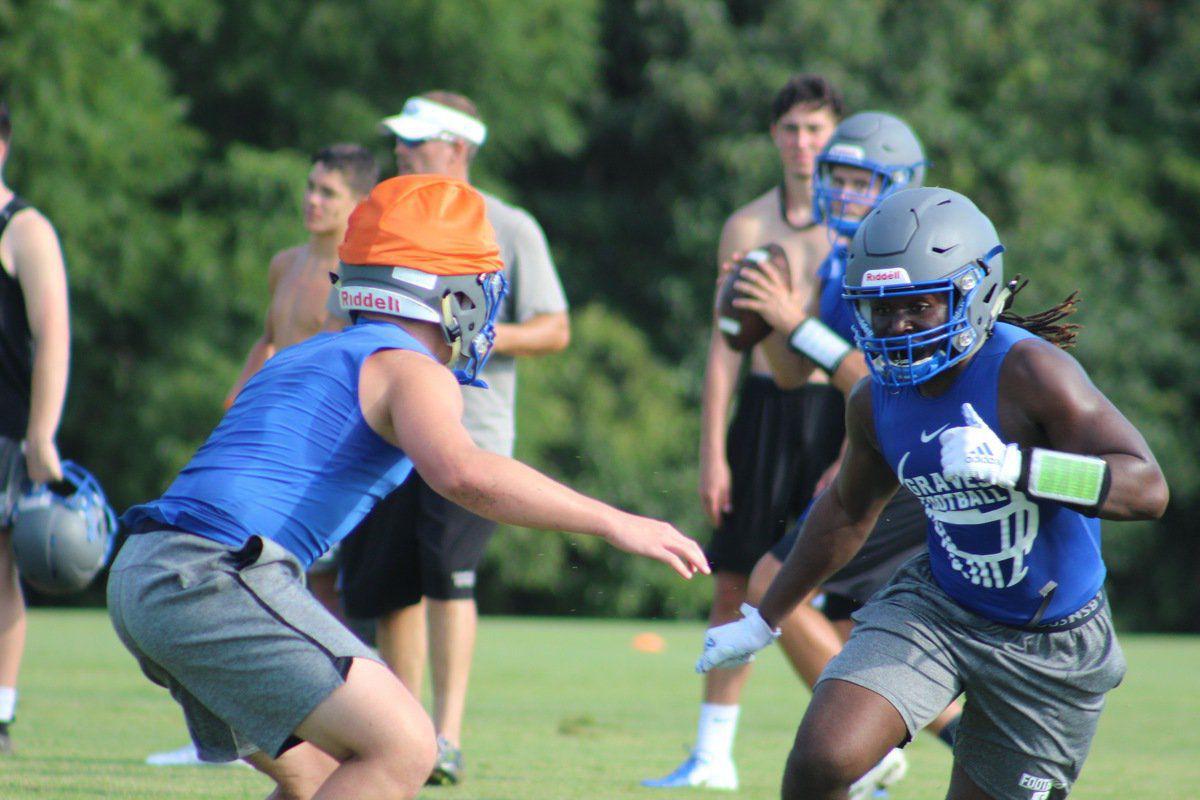 Wide receiver Nelson Browning (right) works against a defender during a summer practice session to get open for a pass. Browning will also be a key on defense in his fourth year as a cornerback. 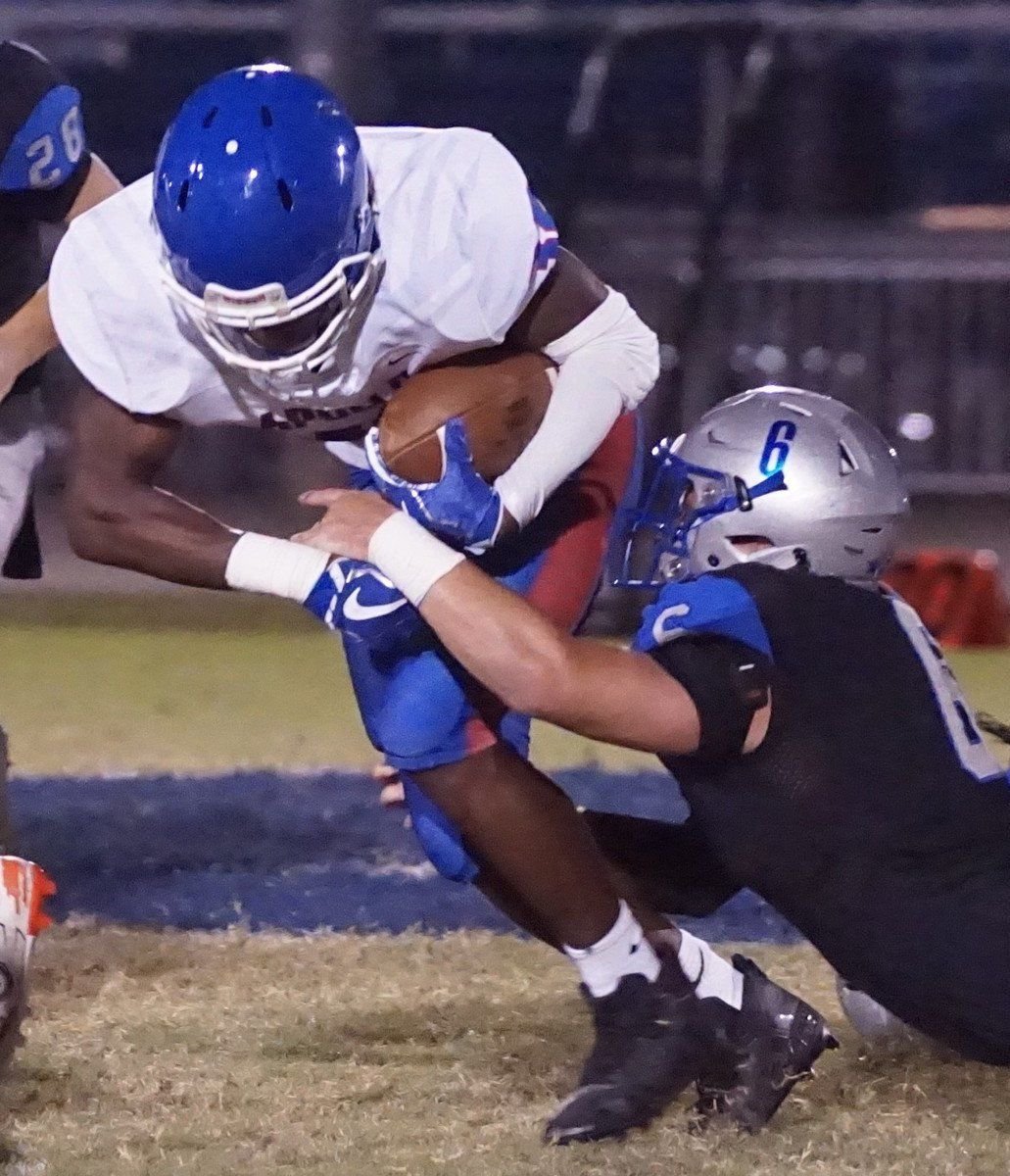 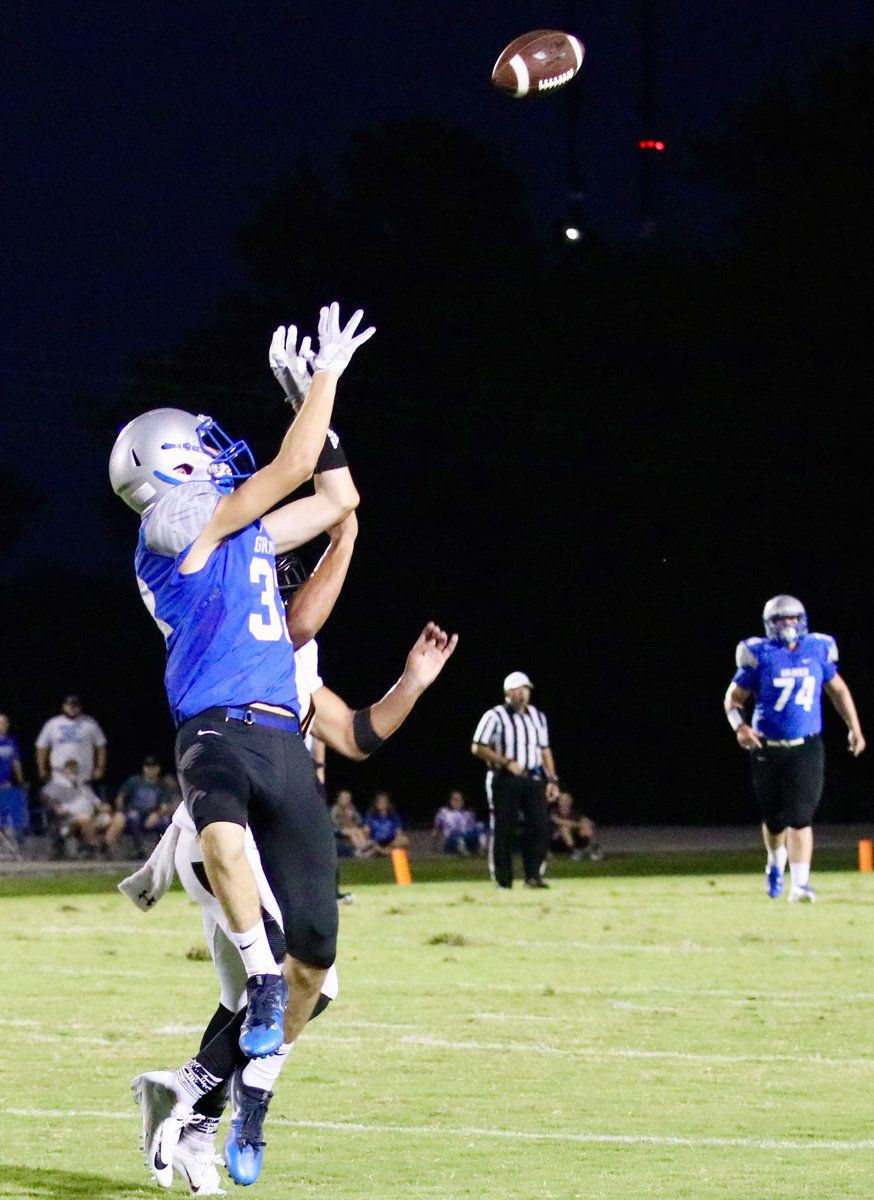 Graves County receiver Race Richards (33) goes up for a pass during a game last season. Richards will be a key target for the Eagles this year, as well. 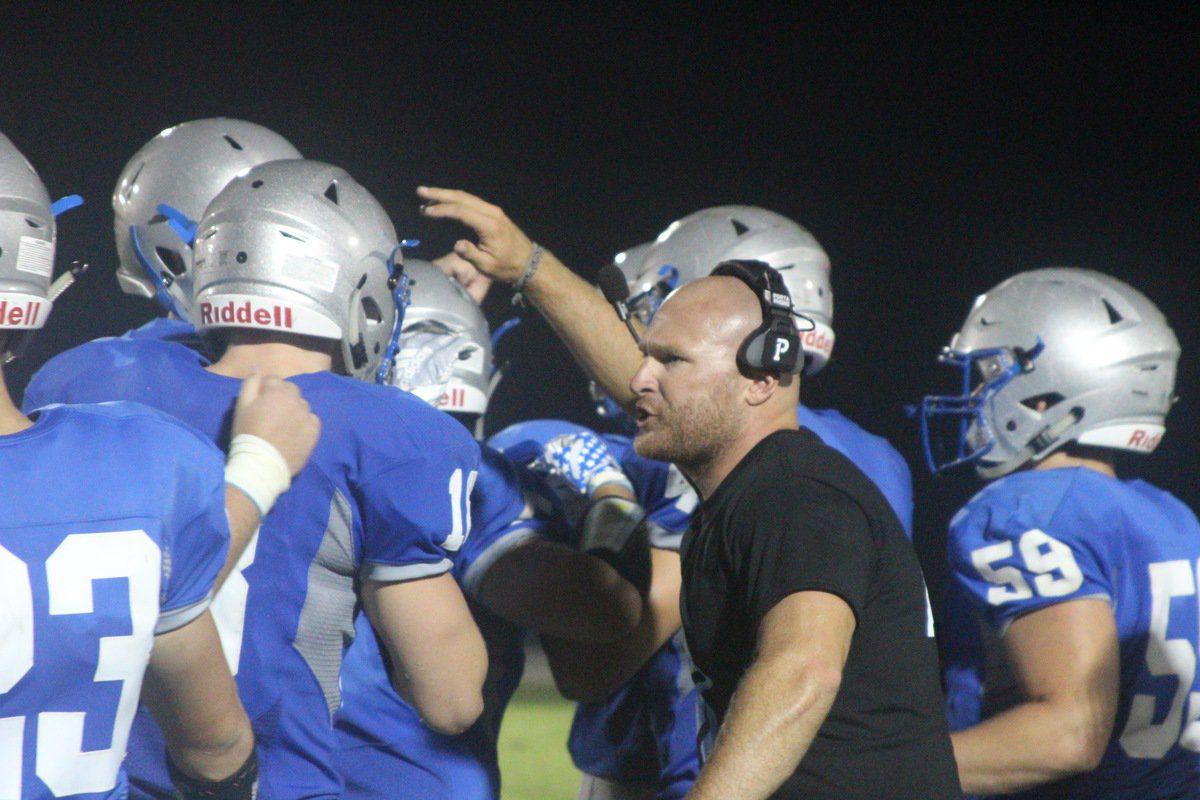 Then-defensive coordinator Nick Kemp talks to his squad during a timeout in last year's preseason scrimmage. Kemp is now the interim head coach for the Eagles following the resignations of Lance Gregory and Morgan Cruce.

Wide receiver Nelson Browning (right) works against a defender during a summer practice session to get open for a pass. Browning will also be a key on defense in his fourth year as a cornerback.

Graves County receiver Race Richards (33) goes up for a pass during a game last season. Richards will be a key target for the Eagles this year, as well.

Then-defensive coordinator Nick Kemp talks to his squad during a timeout in last year's preseason scrimmage. Kemp is now the interim head coach for the Eagles following the resignations of Lance Gregory and Morgan Cruce.

Nick Kemp had served for two seasons with former Graves County head football coach Lance Gregory as his defensive coordinator. Heading into the 2019 season with Gregory stepping down at the end of last year, Kemp looked to continue his role under Morgan Cruce, who was hired in January to replace Gregory to lead the Eagles.

In May, Cruce resigned, citing personal reasons. Kemp was then pegged as the new head coach with an interim tag.

So along with coaching Graves County this year, Kemp is hoping to get the "interim" term removed too.

"What led me here is not how I thought it would go down, but I'm glad at how everything worked out and I'm just excited about the opportunity," he said. "This is where I want to be. I don't want to go anywhere else. I'm not looking to go anywhere else.

"This is where we live and where I always want to live, and hopefully I'll have a long tenure here," Kemp added.

Heading into the season, which kicks off Friday at Murray, Kemp said he's been pleased with the intensity of his team during the summer practice schedule but understands there has been room to improve.

"I'm happy with the progress that we're making, but there's room for improvement," he said prior to school starting.

There will be a new ball slinger after four years of Ryan Keith Mathis taking snaps as the Eagles' QB. During the summer, Graves County was looking at a pair of options in senior Cody Goatley and junior John Ben Brown.

Goatley (6-3, 205) is also a highly recruited linebacker and running back, and already has some impressive experience under center. His sophomore season, Goatley filled in for an injured Mathis and promptly set a school record for single game passing yards (405) in the Eagles' 2017 opener at Murray.

At 6-5, Brown's size gives him an edge in seeing the field. However as a sophomore, he only completed one pass for five yards. Still, both have been in a summer battle for the starting job.

It is a new experience for Kemp and the Eagles.

"For as long as I've been coaching here, there hasn't been a quarterback controversy or battle, so this is the first year we've had two kids splitting all the reps and battling each other for the No. 1 spot," he said. "We're not where we want to be, but they're both accepting their roles and encouraging each other and helping each other out and that's the big thing."

While the eventual winner will straddle up to the line for the first offensive series Friday at Murray, just whom that person - Goatley or Brown - will throw to is without question within a strong receiving corps.

Graves County lost Drew Cooper, its top receiver from last year, to graduation. But junior Race Richards was right on his heels with 556 receiving yards from 34 receptions and four touchdowns.

"Race Richards is going to be a playmaker. He had several great catches last year," Kemp said. "Riley Thompson had an amazing offseason and is probably the most improved person on our team on both offense and defense. He's a big kid who's out there playing receiver and moves to tight end to block for us."

Browning caught 20 passes for a combined 346 yards for five touchdowns his junior season.

"Nelson does a great job of getting open and made a lot of big plays for us last year," Kemp said. "There's several more but those three kids are going to be leading us."

The ground game will also see a committee put together to move the ball. Browning ran for 94 yards and a touchdown last year. Goatley led the team in rushing yards with 502 and nine TDs in eight games. He was sidelined the final three games after suffering a broken foot in the Eagles' game at Christian County.

Sophomore Clint McKee (5-11, 165) may be the one to look to at running back this season following his freshman year when he ran for 395 yards and a pair of touchdowns.

"It's going to be who's got the hot hand," Kemp said. "Cody's going to be running the ball sometimes and Nelson's going to go back to running back, as well, and I think Clint proved himself as a freshman and he's beefed up a little this season.

"If he can keep his speed, then I think he's going to get the majority of reps at running back, but there could be some times where it's split up between those three guys," the coach added.

With Smith at center returning after being sidelined with an injury last season, they return experience following an 11-game stint last year that saw the Eagles finish second in the First District 5A class. They eventually fell to Grayson County in the first round of the postseason, 54-35.

"As the season went along, they progressed," Kemp recalled. "We're still young but we're big kids who like to get after it. If we can get them blocking the right person, I feel we'll be successful.

"The aggression is there, the size is there, and the strength is there," he added. "It's them knowing what they're supposed to be doing and not being confused about it; just making sure they're on the same page."

Kemp said Womble will be the defensive line's engine. "He's got a motor that doesn't stop. I have a hard time feeling people are going to be able to block him one-on-one," the coach added.

He added that there may be some offensive linemen, like Buzanis and Cotton, shifting over to help with the D-Line to add to the depth.

"If they keep working hard, we have five O-linemen and four D-linemen where they don't have to go both ways," Kemp said. "We keep telling them at any time one person could take their position and they'll have to go both ways. They've kind of embraced that and they work hard against each other and that's great."

"That's a lot of beef in there, so they should be good," Kemp said.

Caleb Beck (6-0, 180) will play middle linebacker and safety in a utility manner. Thompson was a safety his junior year but moved to outside linebacker this year. He's already received college football offers from Kentucky Wesleyan, Bethel and Morehead State.

In the defensive backfield, Richards and sophomore Mason Grant (5-9, 140) will play safety. Kemp noted that freshman Cayden Goodman (5-8) could also see time on the field in that regard.

"He's a little undersized and not as fast, but he's so coachable and is always around the football," he said.

Graves County has a freshman kicker in freshman soccer player Conner Thomas. Kemp said being a freshman that Thomas' leg isn't as strong, but that he should be automatic for point-after kicks and inside the 30-yard line.

"You'll hear his name the next four years," the coach said.

The Eagles will also have a new district lineup with only defending district champ Owensboro remaining after the exodus of Christian County, Owensboro Apollo and Marshall County from 5A or the district. Now, the district is made up of the Red Devils, Breckenridge County, Ohio County, Grayson County and Muhlenberg County.

Marshall will be the final game of the regular season, hearkening back to the mid-autumn Pumpkin Bowl years.

"The first four games are pretty tough," Kemp said of Murray, McCracken County, Paducah Tilghman and crosstown "Battle of the Birds" rival Mayfield. "We'll be tested. If we can prove ourselves in those four games, I think the district will take care of itself."

Eric Walker is the news editor for The Mayfield Messenger. He has also worked as a staff writer for the Messenger, editor for the Murray Ledger & Times, and in public relations. He is married with two sons.