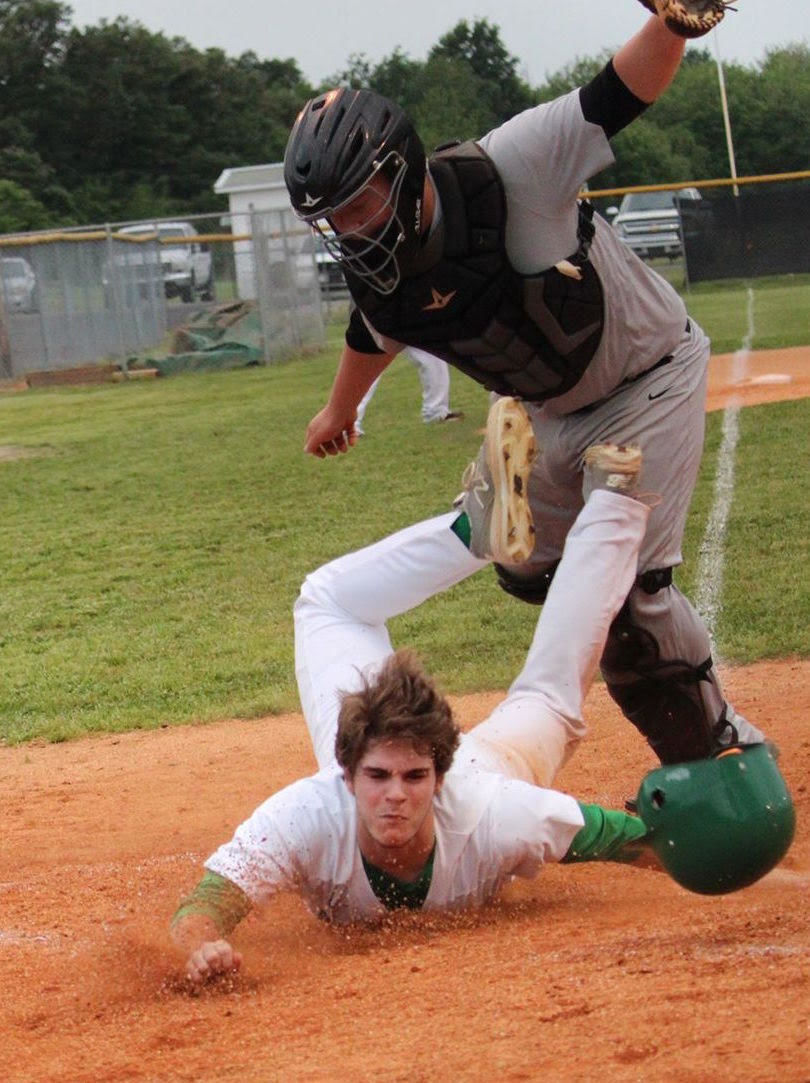 Mayfield catcher Colin Price attempts to tag a runner out at the plate during a game last spring. Price led the team in batting average in 2019, hitting .490. 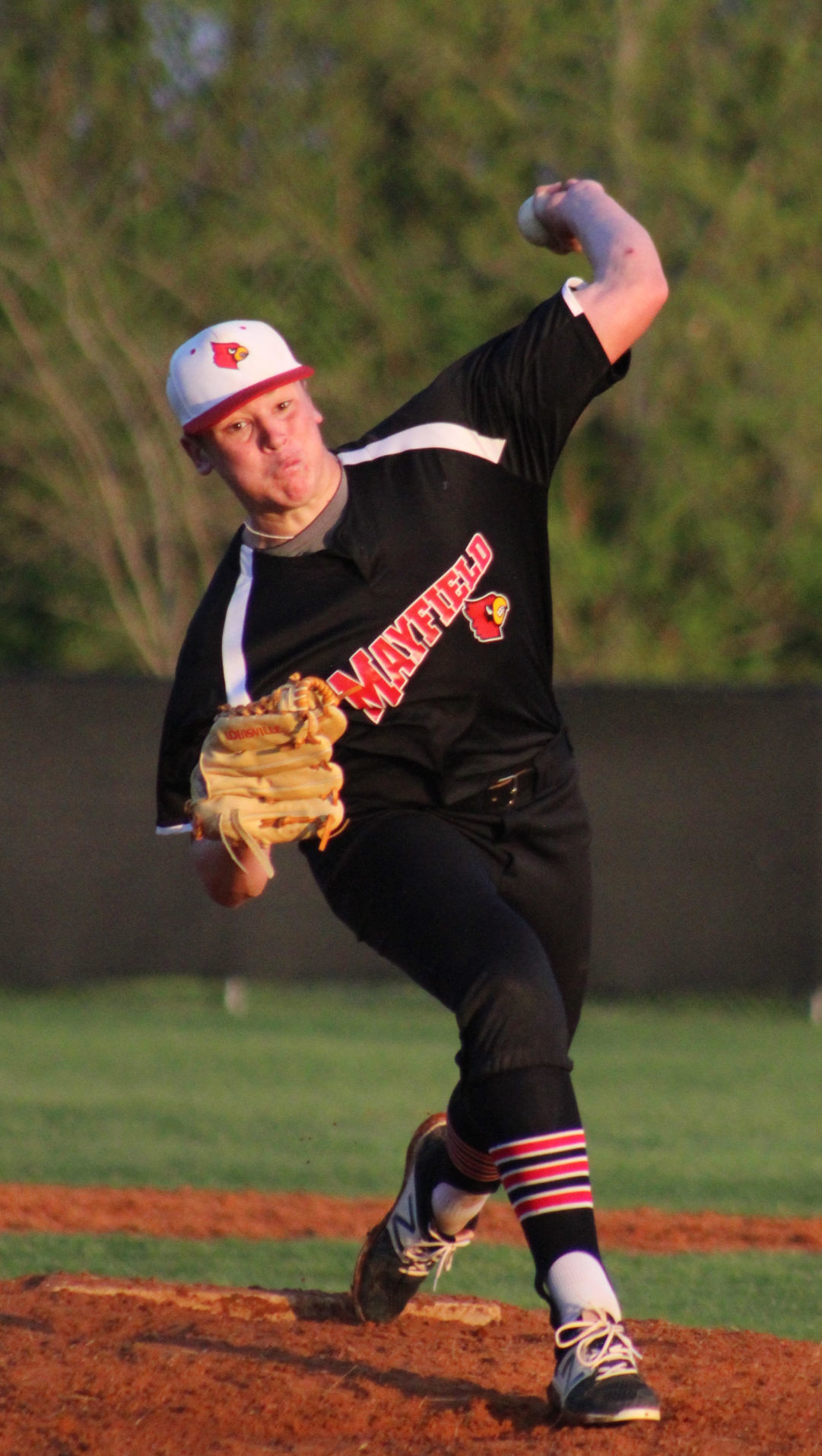 Mayfield pitcher Jayden Stinson delivers a pitch to the plate during a regular season game during his sophomore year. Stinson is coming off a torn labrum injury in 2019 and is poised to be a top arm in the Cardinals’ rotation this season.

Mayfield catcher Colin Price attempts to tag a runner out at the plate during a game last spring. Price led the team in batting average in 2019, hitting .490.

Mayfield pitcher Jayden Stinson delivers a pitch to the plate during a regular season game during his sophomore year. Stinson is coming off a torn labrum injury in 2019 and is poised to be a top arm in the Cardinals’ rotation this season.

At a small school like Mayfield High School, two and three sport athletes are more common than anywhere else.

Student athletes will flood their free time with football, basketball and even baseball like star wide receiver Alonzo Daniel, or they’ll opt for the volleyball and girls basketball teams like junior Samantha Hurt and senior Madison Felts.

Whatever the combination may be, one thing is for certain when each season rolls around, the kids just want to play.

That’s been the common theme statewide this spring after the KHSAA implemented a “dead period” for Kentucky high school athletics following the coronavirus outbreak that has been sweeping the nation over the past few weeks.

With the season in limbo, many players across the region are nervously awaiting word on whether they will get to step onto the diamond, track or tennis courts this season.

For baseball players like Jayden Stinson and Colin Price, the chance to suit up for the Cardinals one more time means more than they can put into words in a time like this.

Both seniors were starters on the Mayfield football team that saw three consecutive trips to the 2A state championship game come up empty during their high school careers.

Despite their shortcomings in the fall, baseball has been there for these two, and many others, as a release every spring.

Heading into the 2020 spring with uncertainty, each player agrees that the chance to represent Mayfield together once more is their main priority.

“It would mean a lot,” Price said. “I love representing this school in both sports I play. I have some awards and accolades that I think this team and myself can accomplish and I’d love to put that jersey on again.”

“Growing up I have always had a passion for baseball,” Stinson said. “But I’d say the most important thing about getting back out on the diamond would be getting to go out one last season with my best friend Colin Price.”

While Price and Stinson have been sportless since football season wrapped up in December, both players assure they’ve been working out and preparing for the upcoming season.

Stinson is coming off a missed season in 2019 after a torn labrum restricted his chance to suit up for the Cardinals.

Looking ahead to this spring, Stinson said he believed he was as ready as ever to hit the field with his teammates.

“Going into this mess I was probably in the best shape of my life preparing for baseball and the upcoming summer at Murray,” Stinson said. “I’ve managed to put together my own little personal gym to make sure I don’t lose any of the progress that I’ve made.”

Price said he’s doing the same right now, working from home and awaiting word on when and if the season will take place.

“I have some dumbbells and other weights at home,” Price said. “I’m trying to maintain what I’ve built through the off season. I still go up to the batting cage and get hacks in and do some arm care stuff. I’m trying to take advantage of and train with the enormous amount of time we have.”

The current dead period is expected to last up until April 13 and no word has been spoken about any extensions at the moment.

With a legacy already left behind on the gridiron, each player said they’d like to see their time as Cardinals remembered for how hard they fought in each sport, and how much they admired the Mayfield fans’ support.

“The most important thing to know about my time at Mayfield, regardless of the sport, is how

much I have appreciated the support every time I took the field and the pride that comes with putting that Mayfield name across my chest every single game,” Stinson said. “I hope that people have seen the love and passion I have not only for the sport and my teammates, but for the community as a whole.”

“In both sports the Mayfield community was awesome to play for,” Price said. “I want everyone to know that we as a team worked hard through ups and downs and I loved being a Mayfield Cardinal.”